All articles Next article

When you think of video use in recruitment you probably imagine some kind of career videos. But the usage of videos for staffing purposes could go far beyond that. At the last Sourcing Summit Europe, and more thoroughly at Sourcing Summit Germany, I introduced what I call VIDEO SOURCING: unorthodox methods how to use video for sourcing candidates online.

The current state of technology favors the usage of videos. The faster internet and cheaper video equipment make video production and distribution easier than ever before.

Let me mention a few video statistics that are relevant to the talent sourcing topic:

I am a former software engineer now happily in the middle of the recruitment industry so my duty and passion is to apply current and emerging technologies into daily sourcing routines to help staffing professionals reach their business goals and ultimately promote the rigid industry. For almost four years at Recruitment Academy we have been coming up with new disruptive techniques, methods, software and also hardware inventions which we test at our sourcing lab with over 140 employees and at our recruitment software development center producing some neat recruitment apps.

Let me present to you five innovations from the area of video sourcing. Almost none of them have reached their plateau and talent sourcers don’t use them regularly…yet. Some of them are in their concept phase so you could try to implement them to get ahead of the curve.

If you hire software engineers, which is probably the most demanding group of candidates, you know that the main problem is the battle to get the candidates engaged. The response rate is significantly lower than with other types of candidates. When I measured the average response rate using text-based messages (e-mails, InMails, LinkedIn invitations, LinkedIn group messages, etc.) for our roles across industries we were in the neighborhood of 36%. My estimate is that software developers answer around half that percentage.

Video job descriptions is one of the ways to significantly increase this number. Technical staff simply receive too many recruitment messages every day so you have to do something extra to cut through the clutter. It takes more effort to do that but there are no shortcuts for a higher response rate.

A video job description is an interview-like video with the hiring manager or let’s say the potential boss of the approached candidate.

Example of a video job description for the company 2N

The hiring manager briefly introduces himself, the company and what type of employee he is looking for. This video can be uploaded to Youtube or Vimeo channel and doesn’t necessarily need to be marked as unlisted. The Talent Sourcer delivers the video link to the longlisted candidates instead of the ordinary recruitment text message.

This is about creating the attention. And this is what you do here…twice. Firstly, you use a format which the ordinary candidate is not used to which is a video.

Secondly, your candidate can already see their potential boss which promotes the job description to another level. Text job descriptions are often vague and if you put 10 job descriptions for Python developers next to each other, they might look pretty much the same. Using a video job description you might make even a regular vacancy more interesting by adding the personal aspect which increases the likelihood that a candidate would agree to an interview.

On the other hand, if the hiring manager is not the candidate’s cup of tea, he/she doesn’t waste time with an interview because most likely the result will be the same regardless of whether face-to-face or video “meetings”.

For some situations you have to use an even higher caliber. Either for the roles with the lowest response rates or in cases where you know that the candidate market is very limited and you know that there are not enough candidates to fill the vacancy with pure volume.

And individual video invitation is a video by a recruiter or talent sourcer which is targeted to one specific candidate. A recruiter simply takes a mobile phone and creates a video starting with something like “Hey George, I found your profile on LinkedIn and it seems that…”. This video is uploaded to Youtube as an unlisted video for two reasons. Firstly because you don’t want to infringe on a candidate’s right to remain private concerning your approach to them about new career opportunities. And secondly, because you don’t everyone to know that you created multiple almost identical videos for different candidates.

This is attention on steroids because every candidate is going to think something like “Wow. Someone spent 5 minutes of his/her time to do a video just for me? I have to answer.”

So it is not out of the question that with this method you could reach 100% response rate. The less demanding version of this method is group video invitation which is not personalized to each candidate separately.

Let’s do the math. This is our recruitment funnel analytics I created based on our data across all industries and roles.

So you need to contact approx. 23 candidates to have a chance to hire one of them. When you have less than 23 longlisted candidates you are statistically in trouble. In this case you can find video sourcing as the effective solution which might help you from this unfavorable situation.

You probably know of VR (Virtual Reality) or also called 360-degree videos as company walkthroughs. But you can use VR videos for direct talent sourcing too.

How about to provide candidates an experience where he/she can appear right on his/her potential seat, look around the office, see potential peers and let the potential future boss explain what the company and the job is all about.

In this format you can create both video job descriptions and as well as individual and group video invitations. You can even send the VR headset (e.g. Google Cardboard) to your candidates because the cost is so low (it varies from $1 to $10 including shipping depending on the materials – paper, leather or plastic. Check out Aliexpress.com VR headsets).

Cheap VR headsets for usage with a smartphone

These cheap VR headsets are just an empty shell where you place a smartphone inside to make it work. So imagine that you send one of these VR headsets to a candidate with a link to the video. He/she just puts a smartphone into the VR headset, clicks the link, and voilà.

The beauty of this is that the recording equipment is also very cheap and starts at $50 (Aliexpress.com VR cameras). For this particular purpose you don’t need anything fancy. Cameras with one or two fish lens are just fine. The example above is done with such a camera for about $300. The challenge with VR is to do moving VR videos because VR cameras shoot everything around (360 degrees) so whoever holds the camera is also visible. Doh!

Because of that there is special equipment such as movable robots and gimbals for stabilization. For sourcing purpose you are just fine with the static video so you need just the video camera on its own.

If you want to have better 3D quality (which requires two stereo lenses to each direction), you have to prepare at least $1000.

To be clear 3D doesn’t mean VR and 360 degree doesn’t necessarily mean 3D. I’ll explain this in a separate article about VR recruitment videos and how to do them.

The latest trend is to focus on authenticity. One of the tools to help achieve that is to do live videos. Think about all the options there are at the moment: Facebook Live, Instagram Live, Twitter Live, Youtube Live, Periscope and many others such as Twitch. LinkedIn is preparing their Live feature as well!

On top of that we have so called “Stories” – pictures and short videos which are available only for 24 hours. This was originally a SnapChat feature, but now you find it on lots of others media such as Instagram, Facebook, Facebook Messanger and WhatsApp.

Live videos are the way to reach a group of targeted candidates whether it is video job description, individual video invitation, career video or a webinar.

There are also many variations you can do. You can create an offline video, insert subtitles there, intro, captions or edit it and broadcast it live afterwards. So it’s offline video streamed online. You can do that with software such as Wirecast and OBS Studio.

You can also combine it with VR videos and do Live VR videos as well. Almost endless possibilities.

One challenge I was solving was how to stream to the multiple live channels at the same time. There is a service called Restream.io providing you a possibility to stream to multiple social media channels usually based on RTMP and also multiple social media accounts (e.g. your company Facebook plus your personal Facebook) from one source such as a mobile phone or a PC. The problem is that you are not able to integrate either Instagram or Twitter into it because they use some proprietary protocols.

At Recruitment Academy we have created for this purpose a special selfie stick on steroids which I call Mr. Hollywood selfie stick.

Selfie stick Mr. Hollywood for streaming to multiple social media channels at once

It can hold up to 3 smart phones. It has its own LED lighting for a higher visual quality and also integrated high-quality microphone connecting all cell phones into one audio source.

Selfie stick Mr. Hollywood for streaming to multiple social media channels at once

We’ve created InCam as a special device which should lure candidates to your personal LinkedIn profile and therefore create the attention about you or your company which may ultimately lead to a higher candidate engagement.

InCam is a small box of magic

This device takes a picture every 60 seconds and uploads it directly to the top-banner area on your LinkedIn profile. You can see a timestamp and the output is marked as LIVE to emphasize that it is dynamic content.

The output of InCam at Sourcing Summit Europe in Amsterdam

InCam is a custom-made product including Raspberry PI embedded computer.

As you can see, there are endless possibilities of video usage in various forms. And that’s not even all!

In my next articles you can expect that I will go deeper on each of the techniques to demonstrate thoroughly how you can do it, what to buy, how to assemble different things and what is our best practice experience in video sourcing.

Follow me (LI, FB, IG, TW) for more updates on this topic. Thanks! 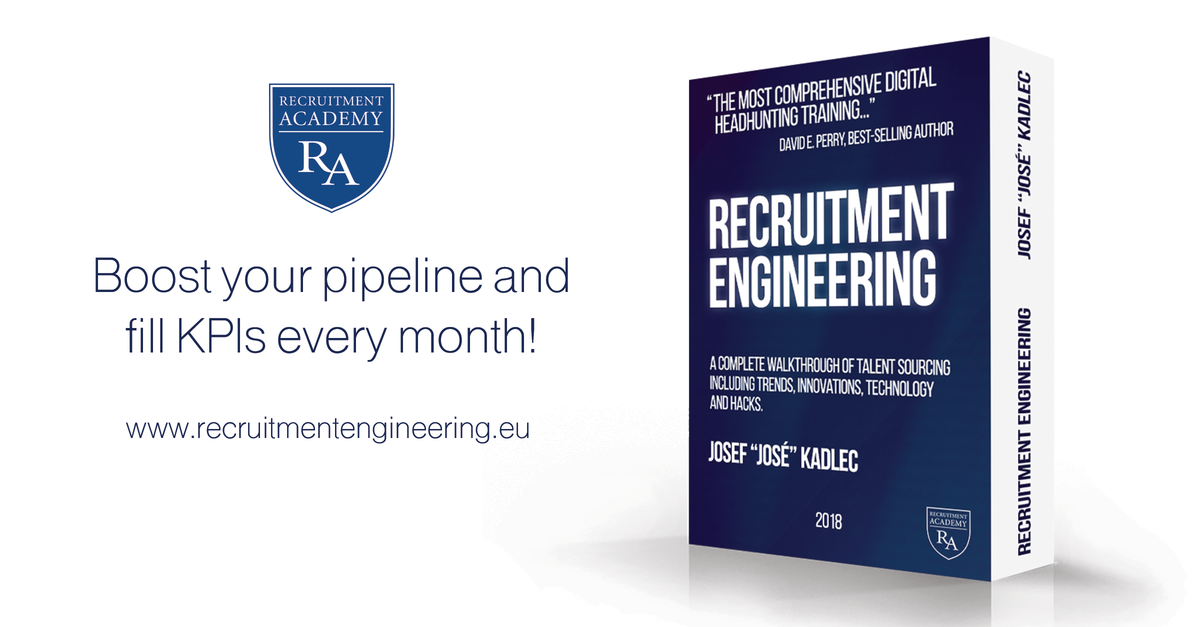